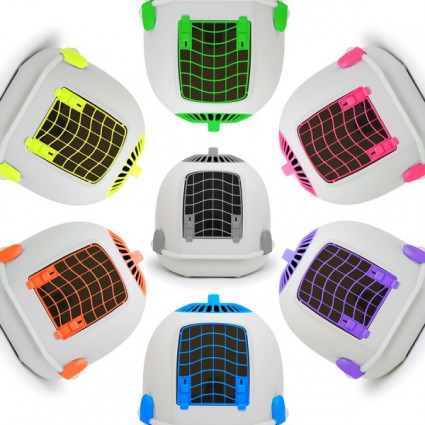 I am the type of detailed person who enjoys completing surveys and providing feedback, so you can imagine my delight when I was to be asked by Igloo Pets to review their innovative 2-in-1 pet loo and carrier!

I was asked which colour I wanted, there are nine colours to choose from! I was swayed by all the lovely bright colours, but settled on Tundra Grey just because it coordinates well with the lovely grey porcelain tiles of my hotel and being neutral would fit in nicely to each of the suites if needed.

So this is what Igloo Pets say about their product:

The Igloo is a combined litter tray and carrier which will look good in any home. Your purchase will include the igloo in your chosen colour, five specially moulded eco-friendly disposable liners to contain your cat’s preferred choice of litter. Also Included are replaceable carbon filters helping to keep your home odour free and a removable, smoked privacy plate for when the igloo is used as a cat loo.

The Igloo with it’s unique eco-friendly liner allows the cat owners to use their preferred litter. As the litter and liner are disposed of in one easy manoeuvre it leaves the Igloo Base clean and ready for the new liner and litter. The Igloo combines both a cat loo (toilet) and carrier when taking to the vet or on vacation saving both space and money.

The starter pack retails at £46 and includes The Igloo, a month’s worth of their proprietary cat litter ‘Snow’, filters, some biodegradable litter liners, a litter scoop, Crystal clean spray and ice fresh deodoriser, which I think represents good value when you consider you don’t need by buy a separate carrier or litter tray.

My first impression of the Igloo is it’s very stylish. Ergonomically shaped and big enough for even the largest of cats. Mind you weighing in at 2Kg, it is not lightweight, so add an adult 4-5Kg cat, and you would need to be fairly strong to then use this has a carrier.

I will admit that I was a bit dubious about any product claiming to be a cat loo AND a carrier. The two don’t really sit well together when you consider the hygiene implications. They have included separate litter liner trays, so in theory these can be simply lifted out of the Igloo and you have your cat carrier.

However, given that I clean a lot of litter trays on a daily basis at my hotel, I can vouch for the fact that… how shall I put it, not all cats keep their business to the confines of the tray! 🙂 Some cats like to paw the sides of covered litter trays, leaving mucky paw prints and others can spray and splash the sides!

Which does make you think how likely would I use the Igloo as a cat carrier after it has been used as a cat loo given the effort to clean it before I took it out?

So with that in mind, I opted to use my Igloo as a cat carrier first and loo second. Molly my kitten was due to go to the vet for her vaccination booster, making her the ideal candidate!

The Igloo’s First Trip out

Here is Molly in her Igloo carrier. 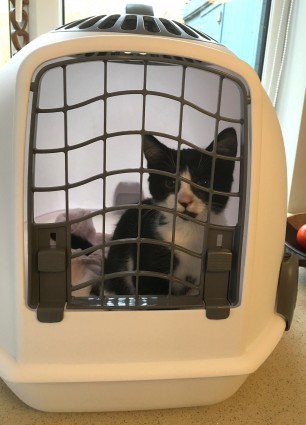 Like most cats, not many of them are that fond of going into their carriers as this invariably means a trip to the vet. I had left the Igloo out for a day before with toys in it, so Molly was used to jumping in and out of it. I assume that had it been used as a ‘loo’ before hand then the cat in question would also be familiar with it too! 🙂

It was only when I closed the hinged flap and she realised she couldn’t get back out, did she  start to squeak. Mind you she is like that in any other carrier so this is no fault of the Igloo! 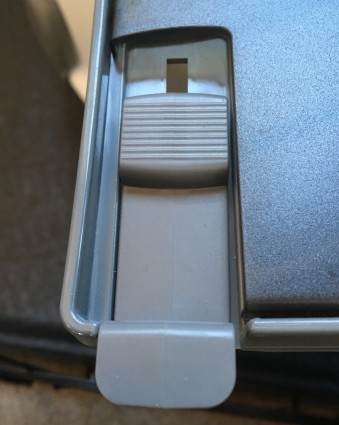 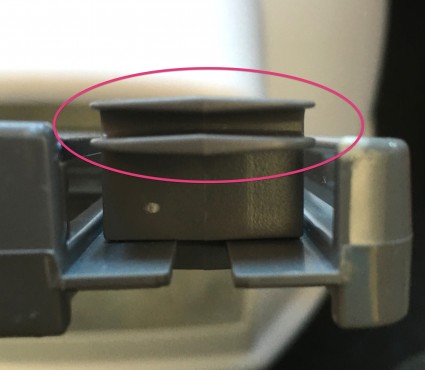 I will say that the two catches on the lockable flap are potentially a bit fiddly if you have an eager-to-escape cat to contend with or poor eyesight! The two locks slide up and down and you have to line up the mechanism with the bottom of the carrier to secure it. A couple of times I thought I had secured it only to find that I hadn’t which is something I would have hate to find out on the way to or from the car!

The handle is moulded into the unit, which feels secure and would easily cope with heavy loads unlike some other carriers.

With Molly inside it was no problem at all, although because she had lots of room she moved around a lot, which does make for awkward carrying whichever cat carrier you use!

I tried Charlie (our other cat) who weights in at 4kg in the carrier as well. It was fine, but the Igloo is slightly wider than a standard carrier so it does make for an interesting lopsided walk when carrying a heavier load. 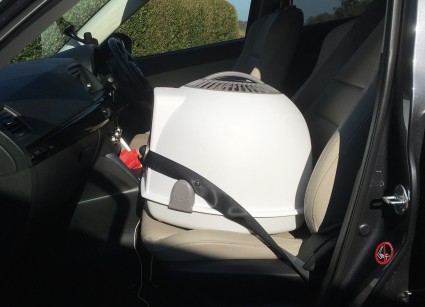 Due to the contours it does sit nicely in the car. I had to have mine on my front passenger seat due to child seats in the back, but it fitted the seat much better than one of my other more rectangular carriers.

The shape also allowed for easier fitting of the seat belt around it to secure in place.

It is not until I arrived at the vet and I am sitting in the waiting room do I become self-conscious. Is it my imagination or are people looking at me and wondering why I have travelled my cat in her cat litter box? It almost doesn’t matter how I explain it… it does have ‘Igloo’ written on the front of carrier!

Getting Molly in and out of the carrier was ok but only because she is small and can be lifted with one hand whilst my other hand holds open the flat. Most doors on cat carriers are hinged left or right like a door. The door on the Igloo is a flap so it has to be held up with your hand or arms or by someone else while you grapple and coax a larger cat out with both hands. You can of course take the flap off completely, which I think I would do if I was doing that again with Charlie. Going back in of course is no problem as cats are always happier to ‘self-load’ when leaving the vet to go home! 🙂

Life as a Loo

Now for the next big test! I have to say I am not usually a fan of silica or non-clumping cat litter but I was keen to test the entire product thoroughly, so I opted to use Igloo’s proprietary cat litter ‘Snow’.

This is what Igloo have to say about it:

Igloo Snow pet litter is produced from 100% natural silica gel. Each grain has microscopic pores which absorbs moisture in seconds, binding smells and bacteria. After moisture has evaporated and dry to the touch all you have to do is remove solid waste. This makes the litter long-lasting.

I do like the fact that it is 100% natural and the fact that each grain is tiny so it feels like sand and doesn’t create as much mess as you would expect and as they say less sticks to the paws. There are little ‘blue’ bits in it which I assume are deodorising granules as I didn’t notice any nasty smells that a usual litter tray can give off, but they put that down to the smaller grain sizes which quickly absorb and dry when wet.

So, so far so good.. no smells and no mess! I do like the idea of the nicely shaped biodegradable cardboard litter liner for the tray. My first impression would be how impractical this would be when it gets wet, but this has not happened so far. The litter scoop provided is also very nice and solid. It is small but like everything else is ergonomically shaped and feels really good to use. Igloo also provides a smoked plastic cover that clips onto the flap for use with the litter tray. With the two items clipped together I do think this makes the flap that much heavier and might put off more timid cats from using it.

So overall what did I think?

In a nutshell, I loved it as a covered litter tray but it would take some convincing for me to use this as a carrier and interchange between the two on a regular basis.

Having said that, if your household doesn’t have much in the way of storage space then this is a very clever concept and an ideal product for you.

Keep up to date with the latest news

PAWS FOR THOUGHT FROM LONGCROFT ROMSEY

7ads6x98y
We use cookies to ensure that we give you the best experience on our website. If you continue to use this site we will assume that you are happy with it.OkRead more